The Story of The Nutcracker

It is Christmas Eve. Herr and Frau Silberhaus and their children, Clara and Fritz, are hosting a party. Some of the guests have elected to walk, among them a mysterious gentleman and a young boy. 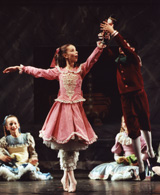 Inside the Silberhaus home, a festive atmosphere prevails. There are dances, gifts and refreshments. Unexpectedly, Claras mysterious godfather Dr. Drosselmeyer arrives with his young nephew. Dr. Drosselmeyer has brought gifts for the family along with his two newest inventions to entertain the children: a life-size mechanical doll and soldier.
Clara is enchanted and begs her mother for the doll. But her mother refuses, and Clara cries. To console Clara, Dr. Drosselmeyer brings forth a special gift: a Nutcracker dressed like a soldier. Clara loves it immediately, but jealous Fritz grabs the Nutcracker and breaks it. Luckily Dr. Drosselmeyer is able to make repairs.
Everyone at the party, children as well as adults, joins in one last stately dance. The guests depart and the Silberhaus household retires for the evening.

Later that night, Clara tiptoes into the parlor to search for her Nutcracker. With the toy safely in her arms, she drifts off to sleep but is awakened by a mischievous mouse.
Mysteriously, Dr. Drosselmeyer appears. He summons more mice, then casts a magic spell. Soon they are joined by an army of toy soldiers, who battle the mice. As Clara watches, her Nutcracker miraculously appears to lead the soldiers. With a little help from Clara, the Nutcracker defeats the Mouse King and the soldiers are victorious.
Before Claras eyes, the Nutcracker becomes a handsome prince. The Prince invites Clara to visit his magical Kingdom of the Sweets. They travel together through the Land of Snow, where the Snow Queen and her Cavalier wish them well on their journey.

Like decorations on a fabulous Christmas tree, glittering golden angels appear in the clouds, awaiting the sleigh with Clara and her Prince. 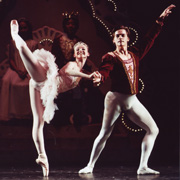 The lovely Sugarplum Fairy appears and all of her subjects gather to welcome Clara and the Prince. The Prince then tells the story of the battle and shows them how Claras clever distraction helped him vanquish the mice. The Sugarplum Fairy is pleased and bids her subjects to entertain Clara and the Prince. She invites her young guests to occupy her throne.

An array of delights appears to dance before Clara and the Prince: Spanish Chocolate, Peppermint Candy, Arabian Coffee, Chinese Tea, Russian Ribbon Candy, Crystal Bells, the Mirlitons with their reed pipes and Mother Ginger.
The celebration continues as the Dewdrop Fairy waltzes with her court of Flowers in a cloud of pink. Finally, the Sugarplum Fairy and her Cavalier reappear in a most graceful and romantic dance, the majestic Grand Pas de Deux.

After a delightful evening of entertainment, it is time for Clara to return home. All the members of the Kingdom of the Sweets gather to bid Clara a fond farewell as she climbs into her walnut-shell boat and sails home.