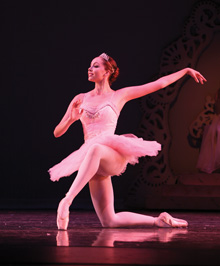 Sarah Poss trained at Westside Ballet and attended summer programs at School of American Ballet, American Ballet Theater, Suzanne Farrell, and The Rock. After finishing high school, she studied with Staatliche Ballettschule in Berlin and the Ellison Ballet in New York.

During her years at Westside, Sarah danced various solos including Doll, Dew Drop Fairy, Snow Queen and Sugarplum Fairy in The Nutcracker (2004-2005). She also danced one of the Paquita variations (2005), a solo in Balanchine’s Divertimento No. 15 (2006) and the Pas de Deux from Don Quixote (2006).