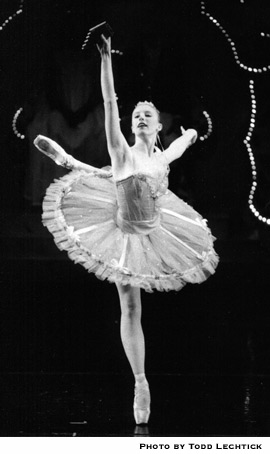 During her Westside Ballet Company years, Kate performed many roles including solo Spanish, solo Russian, and solo Mirliton (pictured here) in the 2003 production of The Nutcracker. She also danced a principal role in Valse Fantaisie as well as lead role in Serenade in the Spring Performance 2004.

After summer 2004 Kate, then age 16, was invited to become a trainee by San Francisco Ballet. In 2006 Kate joined Tulsa Ballet as an apprentice. Just a few months later she was promoted to the corps de ballet. She was promoted to Demi-Soloist for the 2009 season, and Soloist for 2010.

Kate also danced as a guest artist in Westside Ballet’s 2009 production of The Nutcracker.