Anna Liceica began training in her native Bucharest, Romania at the National Ballet School. After moving to the United States, she studied with Yvonne Mounsey at Westside Ballet. She danced the roles of Dew Drop Fairy and Sugarplum Fairy in Westside Ballet’s Nutcracker (1990-91).

After additional training at the School of American Ballet, Anna danced with New York City Ballet in 1994 and 1995. She joined American Ballet Theatre’s corps de ballet in 1996, and was promoted to Soloist in August 2000.

Her roles with ABT include a Shade in La Bayadère, an Odalisque in Le Corsaire, a Flower Girl in Don Quixote, the Russian Ballerina in Gala Performance, Moyna in Giselle, the pas de trois in Swan Lake and the Venetian Carnival Pas de Deux from Satanella. 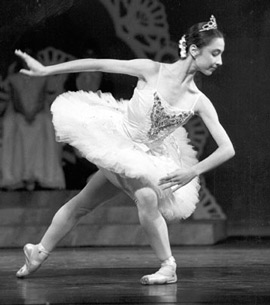