In 1992 Andrew Veyette joined his older brothers Michael and Francis to study at Westside Ballet with Rosemary Valaire and Yvonne Mounsey. He danced in Westside Ballet’s production of The Sleeping Beauty as The Bluebird (1997). In The Nutcracker he danced as Toy Soldier (1995 and 1996), solo Russian and Spanish (1996).

Andrew returned to dance as a guest artist at Westside Ballet’s 2002 Gala.

In an October 2005 “Critic’s Notebook,” Gia Kourlas of the New York Times identified Andrew among a number of “standouts” in the corps of American Ballet Theater and New York City Ballet. Kourlas wrote:

“Andrew Veyette, who has remained a member of City Ballet’s corps for a ridiculously long time given his talent (he joined in 2000), is an impressive jumper and turner with ornate hands and a personality that flickers believably between puppy eagerness and sexy insouciance. He is at ease in ballets by both Balanchine and Jerome Robbins.”

Read Pauline Golbin’s interview with Andrew, shortly after his promotion. 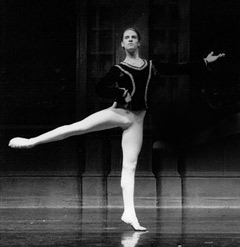