Jordan Dillon Tschudi began studying at Westside Ballet at the age of 15. She then spent two years at Pittsburgh Ballet Theatre School, danced with the company and performed the principal role of Il Taberna in Kent Stowell’s Carmina Burana.

She has reached new heights dancing with the Fort Worth/ Dallas Ballet where she has expanded her repertoire from Balanchine to the classics to working with new and cutting-edge choreographers. Her most recent accomplishments include pas de trois in Ben Stevenson’s Dracula, Arabian in The Nutcracker and lead czardas in Swan Lake.

Jordan returned to dance as a guest artist at Westside Ballet’s 2002 Gala. 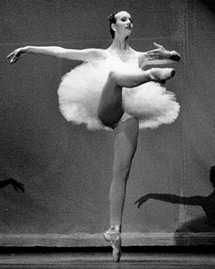