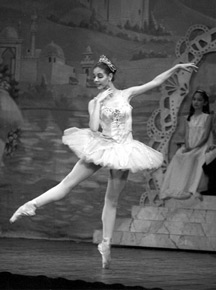 Angela now dances in Seattle with Sonya Dawkins’ Dance Theatre, and teaches on the faculty of Olympic Ballet. She performed with Village Theatre in Brigadoon and hopes to continue with a career in musical theater.

Angela returned to dance as a guest artist at Westside Ballet’s 2002 Gala.